How important really are Photoelectric Sensors?

Photoelectric sensors are a critical component in the field of automation due to their incredible flexibility when it comes to applications. For those unfamiliar, a photoelectric sensor, in its simplest form, is a light sensitive component that converts photon energy into an electrical signal.

The most basic of photoelectric sensors would be the photodiode, which consists of a PIN silicon configuration (p type, intrinsic, and N-type). While a photodiode produces current when light falls on it, this current is far too small to drive circuitry such as motors, actuators, indicators, and drivers. So, instead, photodiodes are almost always combined with amplifying devices such as transistors to boost their sensor output to make them capable of controlling other devices.

Other light sensitive components, such as light-dependent resistors (LDRs), would appear to be photoelectric sensors, but are in fact not, as they do not convert light energy into an electrical signal (their resistance changes but they not produce current). Photoelectric sensors will also often be targeted at specific wavelengths such as infrared, visible, and UV, which is highly advantageous if a sensors if being used in an environment that may be subject to large amounts of ambient light that might otherwise interfere with the sensor.

Indeed, photoelectric sensors have a wide range of applications. As a result, they are often used in automation, manufacturing, and robotics applications.

All of this being said, automated and manufacturing environments may not be the most ideal place for off-the-shelf sensors. High humidity from washing units, low temperatures from freezers, or dust from an automated saw can instantly spell disaster for electronics, which are not designed to work in these environments.

In the best-case-scenario, a damaged sensor can lead to false warnings and equipment shut-off; however, in the worst-case-scenario, safety features may not function properly, leaving operators at potential risk of harm. As such, it is imperative that such sensors are robust, reliable, and proven in the environment that it will be installed.

Photoelectric sensors that are up for the task

For harsh environments where reliability is crucial, Bulgin’s new family of slim-line photoelectric sensors is the component for the job. This line of photoelectric sensors includes a wide range of features that make them ideal for automated environments, including the photoelectric sensor being sealed to IP67, stainless steel housing, ambient humidity range of 35-85%, and an operating temperature range of -10°C to 50°C. The sensors have a quick response time of no more than 0.5ms, which, in turn, makes them well suited for scenarios requiring fast reactions. What’s more, the cable termination for the line is available with M5 connectors for increased mechanical stability.

Bulgin’s photoelectric sensors are available in either PNP or NPN variations, though additional control signal allows for the sensor to be configured if the output is on in the presence of light (or lack thereof). The voltage supply for these sensors is between 12 V-24 VDC. This voltage range also applies to the control signal (which determines if they are normally on or off devices).

Finally, it’s worth pointing out that Bulgin’s photoelectric sensors are capable of object detection ranges from 2mm to 40mm. Also, the sensors’ slim-line construction of just 4.5mm makes them ideal for fitting in space restrictive areas.

The importance of using the right photoelectric sensor

When integrating sensors into a product or application, it is essential that you understand how to correctly mount the sensor. One classic example of the importance of this was the Russian-made rocket, Proton-M. Upon launch, the rocket rotated 180 degrees as some of the velocity sensors on the rocket were installed in the incorrect orientation.

To avoid similar scenarios, Bulgin’s photoelectric sensors have orientation considerations that need to be made when installing them. The sensors are capable of reliably detecting objects that directly approach or move in line with the sensor and emitter. The sensors, however, are not designed to reliably detect objects that traverse across the sensors as an object could be in front of the sensor region but not the light emitter region, which would result in no reflection and, therefore, no detection.

The photoelectric sensor range by Bulgin has a wide range of applications thanks to their ability to handle harsh environments as well as ensure mechanical and electrical reliability. 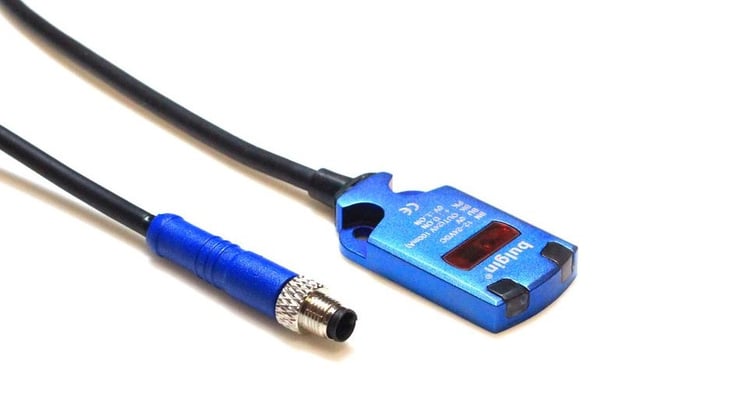 One possible application for the sensors would be as a door safety mechanism in machinery environments. The sensor could be mounted to detect if a door or access port is closed, and if the door is not closed then the machinery in the room or area under guard would be shut down. The bonus of the Bulgin sensor is that due to its IP67 rating, it can be used with a wide range of machinery including drills, saws, washers, and cleaners.

The flexible nature of the cables on the Bulgin sensors also makes them useful in environments involving motion and movement. While the sensors themselves need to be secured mechanically, their cables do not, and so can be moved around. This would make the Bulgin sensors useful in scenarios including robotic arms, which may incorporate the sensors for homing or object detection.

Do you have a question or a project enquiry that you'd like to talk to us about?